Progress has been slow this week because of chores around the house and other things.  I've got a little done but this has turned into alot more than I thought.  The track is totally done and wired and the turnouts in Orange have switch machines attached and wired to push buttons.  Unfun things like cutting and painting facia are about all that remain.  But since those items i just listed are unfun, I drift off to other items like backdrops and a untreated tie load.

I did some research on printing out backdrops on your own.  I was going to take the pics myself but my camera (about 10 years old) is less functioning than my I-phone one.  So, I found some high resolution pics I could use on the web.  Used a mirror image on a few and I have several pics I can use on the lower level on the branch line.

I also experimented with a untreated tie load and found some pics on the web of them in gons.  So, I used a piece of blue foam and cut it to the size of the gon. This takes up most of the space in the gon.   I then cut up match sticks to tie size(gon width).  I cut several different notches in the foam to represent uneven ties.  Paint the foam a tan color and then glue in the ties.

Posted by Shannon Crabtree at Wednesday, July 30, 2014 No comments:

Op Session yesterday and a railroad map of the Virginia Midland

Visited Mike Pulaski's model railroad, the Mohawk and Hudson near Richmond yesterday.  This is the second time I have visited his amazing double decked layout in his basement.  He models about the same time period as me( mid 1990's).  Most of his crew did not show up but that meant more trains to run!  If I were to ever get house with a basement, his layout is the perfect size.  Not too big and not too small.  Did not take a bunch of pictures, but here are a few:

I've slowed down a bit on the work I've down this week.  Lots of tedious work the past couple of days like backdrop cutting and a shelf on the end of the extension.  I've completed all the track work on both levels and still need to add feeder wires to the track.

Bench work on extension is almost done and bigger horsepower

Well this expansion has turn into more work than I hoped but should improve the look and operation.
I have totally revamped the trackage in this area that was once complete.
Major changes:
Horsepower update at the very bottom.

Work on the upper level starts

Just like my work desk, I have to have several projects going on at one time.  My layout is no different.  The lower level has come to a halt and I have moved to the upper level expansion.  I ripped out the bridge and river scene last night.  Amazing that it takes you days to do a scene and only minutes to rip it out.  This area represented some of my first scenery applications on this layout.  I did a decent job on it. I was mainly unhappy with it because of the track and ballast.  It did not look good and why did I ever use sectional track?  Most of the trackage on the VC in the old aggregate area is being removed.  The spur to the elevator will remain.  I will add another crossing to the VMID trackage to access the new expansion.  I will curve the VMID trackage toward the door and the removable cassette will no longer be needed.  It's alot more work but will look good when complete.

A week off from the layout: VACATION

Taking a week off from the layout and life in general to vacation with my family in the Outer Banks in NC.  I have not been down here since the mid 1980's!  During the down time, I'm going to plan out what exactly I want to complete on the layout when I get back.  Orange has ran into a dilemma.  The cassette will not provide enough room for a run-around exchange track for the VMID.  So, I may have to bring trains down to Orange double headed to work the exchange.  I do have one industry in Orange and I may still do the run-around cassette so the local doesn't have to be double headed.  If you don't know railroad lingo, double headed means a loco on the front and the rear of the train.  Some of the CSX locals in our area do this and we have a coal train that comes up from Richmond that does this also.  The coal train runs north and then runs down a branch with the rear locos without having to run around it's train.

So here's whats on the agenda when I get home:


I want to complete the scenery on the expansion of the aggregate facility because this is the first thing you see when you come into the layout room.

Posted by Shannon Crabtree at Monday, July 14, 2014 No comments:

Orange continues at a good pace

I've used this holiday weekend to get as much as I can done on the lower level at Orange.  It a weird setup, like a "L" shadow box, so I have to make sure I get everything done before I cannot reach certain areas.  This includes soldering feeder wires, painting the background blue and other small tasks.  The Norfolk Southern interchange can hold 4-5 cars and the VMID interchange can hold 3 cars.  These car lengths are 50' based.

Worked most of the day on the Orange area and it is a lot more work than I realized. Working in a less than ideal space between levels is no fun. I've hit my hit several times. That probably explains the bad headache I had yesterday morning. Some of the jobs include stapling wires up, running track and road bed in hard to reach places, soldering in those hard to reach places and installing lighting. The good news is that I finally figured out the trackage in this area. Here are some pics of the progress:
Here we look down the roadbed from the hidden trackage 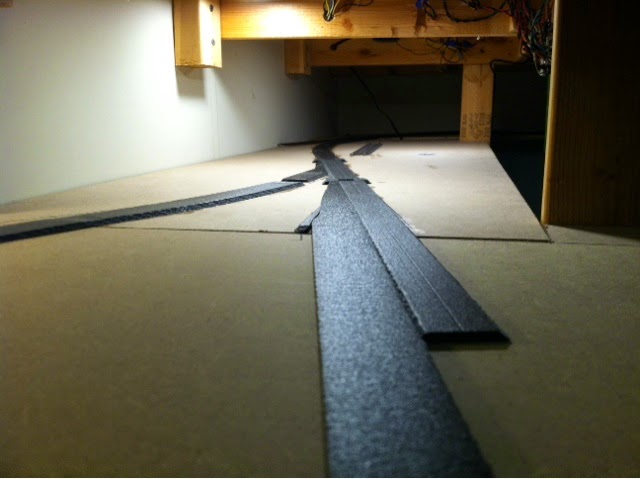 The rest of the area: 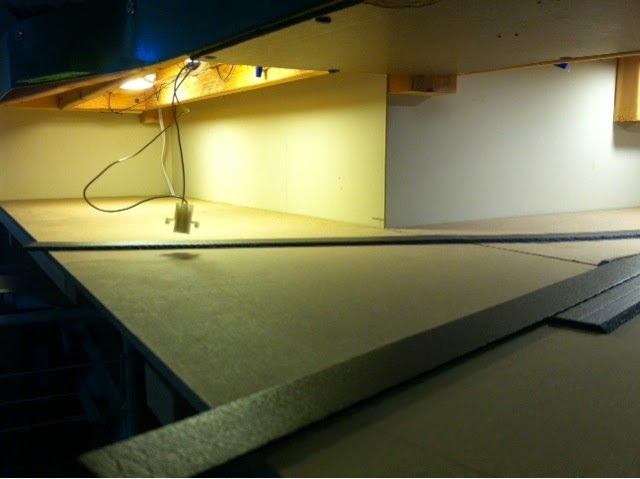 The view block installed. Got get this area painted before I more any farther. 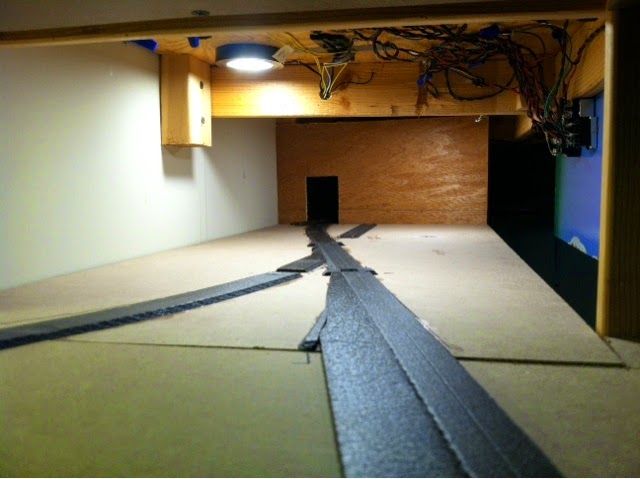 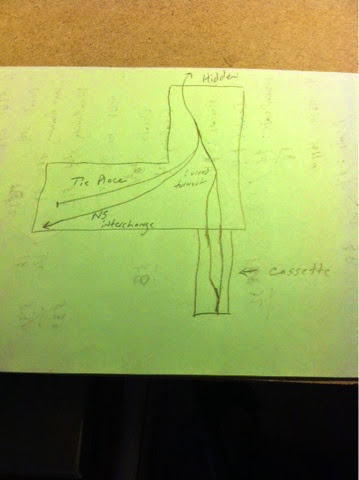 Have a happy and safe 4th of July!
Posted by Shannon Crabtree at Friday, July 04, 2014 No comments:

Been busy this week in completing some weathering work for a client and starting on the end of my lower level.  The weathering encompassed several freight cars with varying weathering.  I even got a few of mine that have been sitting on my desk waiting for a weathering job.  Here are some of the cars:

Completed 97% of the lumber cuts this afternoon for the last leg of the lower level.  The town of Orange, VA will be depicted in a small "L" shaped area.  No luck on the track arrangement.  I like to piece it together on the bench work for a plan.  I'm going to have to get really creative here.  I need a run around track bad.