Progress continues on the branch line

Track work continues on the new branch line on the Virginia Midland branch line.   I like to get the track and turnouts on the bench work and actually design from scratch.  I know what I want and have enough experience to know what will work and what won't.  Designing on paper is fine but unless it's to scale, it doesn't work out.

Posted by Shannon Crabtree at Thursday, November 24, 2011 No comments:

Change of plans on the east end of the layout and the On30 layout.

Well did some bench work altering in the last week.  Against the wall where the hidden staging goes to the garage, I had a grade trackage that went down to the lower level.  This was part of the of the Virginia Central (VC) trackage.  the grade was very steep and  led at one time to a 3 track staging yard.  This did not work out because of the steep grade only short trains could make it up.  I eventually changed it by lowering the last part to put a sand loading facility and trackage. One backfire was I had to put in another grade in to switch the sand facility. I really liked it because I used the 2970 hoppers and they were small.   But I could only bring down 2 hoppers at a time to clear the switch and end of the track.

Well let's change it all.  Above this side of the layout was a On30 layout completely wired and ready for scenery.  I did at one time have have a around-the-room HO layout complete with swing bridge near the door.  I took the swinging bridge out and that side became an On30 layout.  Well the On30 trackage was removed this weekend.  I will put the On30 below on the lower level (sand facility) and add a some to it.  It's almost like a shadow box, with lighting and at chair level.  It's about the same space as above.

On the window side, where the On30 layout is probable become branch line with a pulpwood customer and the hidden trackage(from the On30 layout) will become a offline industry (probably the sand facility) The trackage to the hidden trackage will lead to the facility.  I obtained the 2 separate hidden stagings to the garage by putting a crossing in the wall.  Remember On30 runs on HO track.

Posted by Shannon Crabtree at Tuesday, November 22, 2011 No comments:

Been working on the dreaded back corner of the layout.  Since it's inception in 2004, my layout has had about a dozen of industries in this corner.  Engine facility, paper plant, grain elevator, etc are a few of them.  I finally used smaller industries and even added a small spur for a small engine facility or maybe some thing else?    Anyways, I finally settled and then slowly added scenery to spruce it up.

Posted by Shannon Crabtree at Monday, November 07, 2011 No comments:


Virginia Midland needed some 6 axle power for their increasing workload. Being on a branch line, most 6 axle power cannot be used. A SD20-3 was constructed from SD35. It does well for all the switching on the line. A SD20-3 is basically a SD20-2 like Chessie System and CSX have but it has 4 stacks instead of 2.

Decided to weather up a covered hopper also.  This patched hopper looks as if it was decaled, but right out of the box I covered up the reporting marks and data with tape.  Weathered it and then took the tape off.  An easy way to make a freight car look as if it got a new owner. 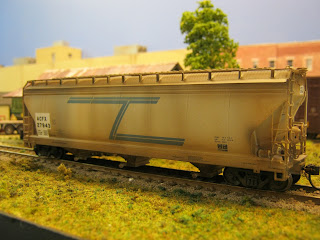 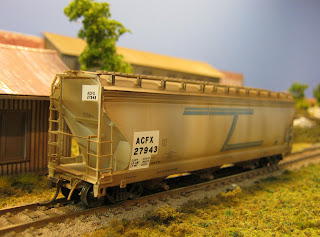 Posted by Shannon Crabtree at Sunday, November 06, 2011 No comments: