Had some time this past week to get some modeling done.  Nothing on the layout but some side-jobs like locomotive painting, decoder installs and running some trains.  My oldest son, Cameron has really took an interest in trains this last few weeks and he's been wanting to go into the train room more than me!  This has came out of nowhere!  So, since I was at the train show last weekend, I decided to get him a locomotive.  I did this because he passed all of his SOL tests this year on the first try.  He really likes Amtrak, so he decided he wanted a P42 locomotive.  I could not get him to settle on the F40 that would have been time wise correct for my layout.  If you know anything about the Kato P42's, they are not DCC ready and required some work to install a decoder.

Just wanted to remind everyone in the Mid-Atlantic area about the Great Scale Model Train Show this coming weekend June 17th & 18th in Timonium, MD (north of Baltimore) . Hours are 9-5 Saturday and 10-4 on Sunday.  This is the smaller of the 4 shows held in the smaller building instead of the Cow Palace.  We still pack about 300 tables in.  It's held at the Maryland State Fairgrounds.  All the info is right here:
The Great Scale Model Train Show

On to the rest of the week.  Wow, this past week has been extremely busy.  Seven baseball games in 6 days is crazy, but that what we were faced with this past week.  Lots of rain outs will cause this and with 2 boys on separate teams, you get the hint.  Throw on top of it yard work and graduation and you have a complete week! I spent most of yesterday re-cooperating from the week.  I did get to run some trains last night, as I had not done this in a while. Even had my oldest son Cam (11)  running some trains with me.  He hadn't done this in a while!  Testing out trains running from staging and meeting at Parker.  Seems like the railroad is going to run as I planned out.  Still have a few feeders to install but in all, it ran well.  Next week looks like it is less busy, and it's the last week of work so there is some modeling railroading in my future! 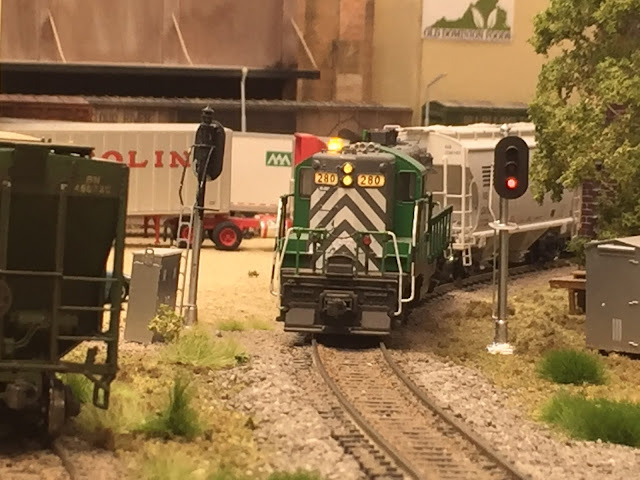 Latest update video is out!