Well it's that time of year again!  Model Railroad season is here and we are kicking of the season with one of our big shows down near Baltimore, MD this weekend!  All the info is on the flyer sheet below.  Checkout the website for money saving coupons on admission to the show.  I'll be there all weekend with the Makin Tracks crew so stop by and say hi!
www.gsmts.com
Makin Track Website 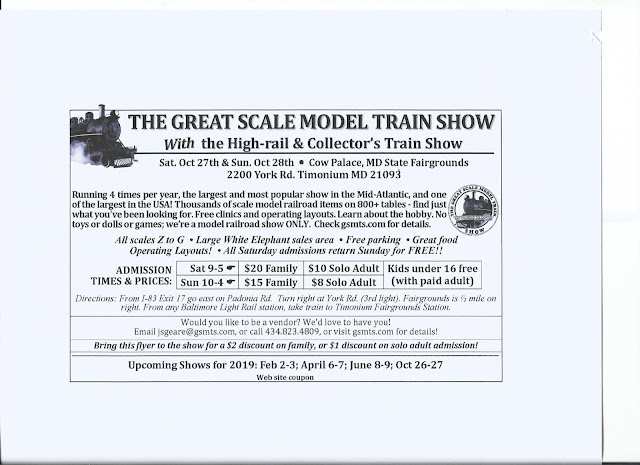 Posted by Shannon Crabtree at Sunday, October 21, 2018 No comments:

Back dating the layout?

Well, not much time on the layout as usual but still doing some model railroading things like shows and a RPM meet.  The main thing I have been contemplating is a possible back date of the layout.  How far you may ask?  I'm thinking the mid 1980's.  I'm currently in the early 1990's.    Why would you backdate it?  That is the magical question isn't it?  One reason is to possibly get older cars on the layout. Another is to get some older locomotives on the layout.  I've grown on F units in the last year and would like to still have them living out their last days on the layout.  A good friend of mine is a F unit fanatic.  That doesn't help either.  I also want to incorporate a few of the Kadee PS-1 50' boxcars too.  I think it is a great transitional time in railroading.  I have even been "floating" around a way to add a car float to the layout!

What's has to possibly change?

The track work is fine for this change.  The industries would have to be examined but I think most are fine.    I'll have to look at some of the freight cars that might be too new for the era.  Of course, I'll have to buy a few new cars like the PS-1 50 footers but when did 40' boxcars quit showing up in the 1980's?  Vehicles seem to me like one of the biggest time setters on the layout.  I'll have to look at each and figure out which can stay and which will need to be sold.  Vehicles for the 1980's are already a black hole.  Not much is out there.  Locomotives will also have to be looked at.  Most of my power is older but a 1984 short line would not have a SD40-2.  Still would have a lot of 1st generation Alco's and EMD's.  That fine with me!  This would let me incorporate the F units on to the layout.  A RS-3 in VMID paint would be a nice touch.  My GP10 still would be OK on the layout.

This is a easy attainable change for the layout.  Not a whole lot of work.  But is it worth it?  I don't know yet.  More research is need and I'll talk to a few other people about it.  But its definitely an easy change to do!  Let me know what you think in the comments! 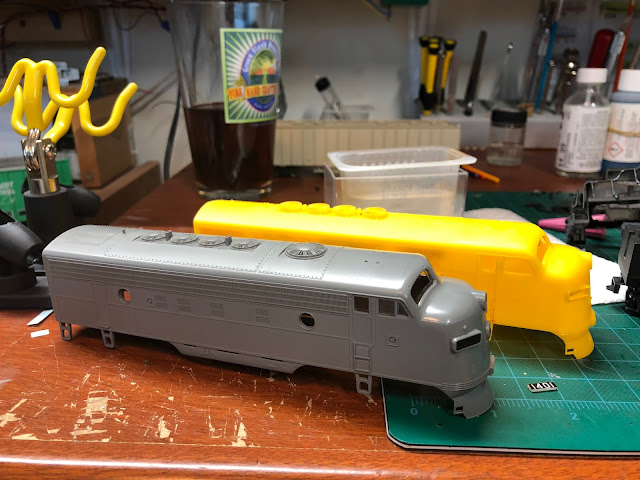